With the Tiscott Boys having found no form at all this season, Tuesday evenings result must be considered something of a shock.  The signs were there on Sunday with Tony Johns putting in a good Lower Basin performance, and though he did not match Sundays weight, a 5lb bag of silvers including a few stamp perch sneaked a second place in that section by 2ozs.  This was crucial as partner Paul Braund had drawn favoured end peg 34, and although chased home by Matt Sampson, he won the Second Basin Section by 6ozs with 7lbs of silvers taken on the short pole (both Paul and Matt found a 3lb bonus bream apiece). 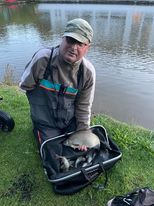 With Simon Allen giving everyone a lesson on the method feeder and bagging over 15lbs of skimmers for the Lower Basin win, it was up to Dave to bring it home for Me and my Boy.  With 3lbs 9ozs of silvers and a decent bream, it was only enough for third and the runner up spot but it maintained thier challenge for the league title from the Lynstone Lads who had an off night finishing fourth (noting that team regular Jack Crystal was away at an England training event).

London Tone Hillas and Matt Sampson were amazingly just 8ozs off winning, but as it panned out the Brendon All Stars had to settle for third.

Its the Stu Bell Trophy up next and with the Tiscott Boys realistically concenteating on wins and trophies, they could start as the favourites next time!